The Workman’s Club Block Party was a celebration of all that I have come to love about the Dublin music scene and all that goes with it. Pop-up markets, a draw with Don class, and beautiful acoustic sets from some of Ireland’s finest were a real treat.

We arrived in time to catch Elaine Mai’s last two songs, and it was the first time I had seen her perform solo (I’ve only seen her before doing guest vocals with Le Galaxie and Daithi). Her voice is amazing. That is all I need to say – check her out and you’ll hear what I mean.

Next up was The Man Whom, someone I’ve been trying to catch since Whelans Ones to Watch 2011. He didn’t disappoint and I’m looking forward to listening to his album that I picked up from him.

Verse Chorus Verse (aka ex-ASIWYFA’s Tony Wright) was his usual charismatic self and I just love his solo work. Roll on the release of his album whenever he gets it out (kinda hoping he does go for the “Leaking it myself” option he discussed yesterday!).

Last up, and not on the offical bill, was Barry Kirwan from Blue Choir who nabbed himself a set while his bandmates soundchecked for Overhead the Albatross. This guy can seriously sing, and the fact that it was such an intimate setting (there were four of us left there at that stage!) just added to the magic. 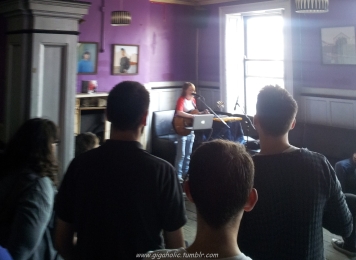 The Man Whom at Workmans Club